The Sphinx of the Naxians at the Delphi Oracle. The story behind the masterpiece 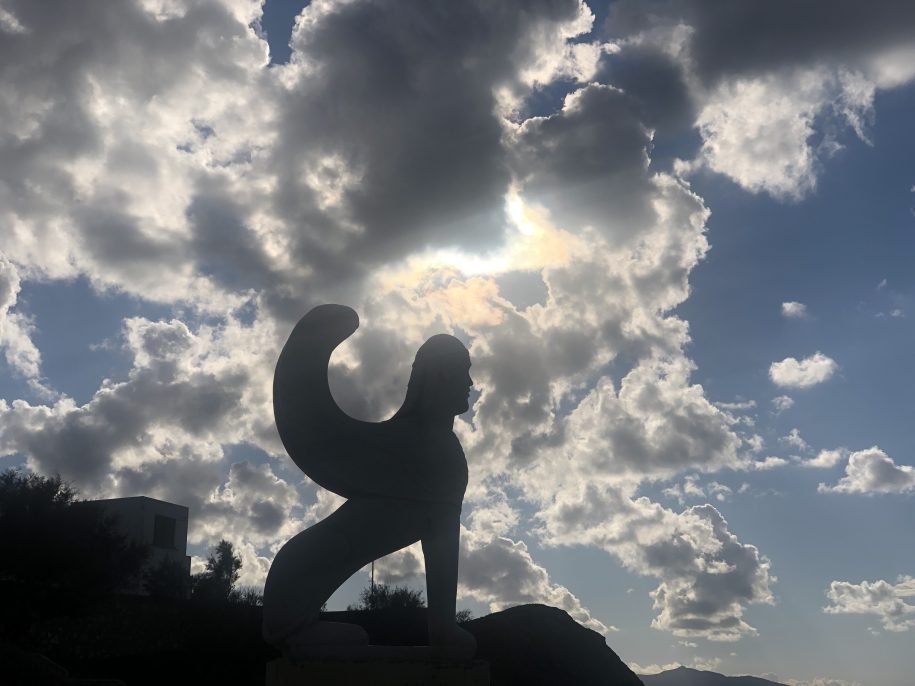 Posted by Blindstudio on 26 February 2022 | Featured

The most famous Oracle of the ancient world was located at Delphi in Mainland Greece. The Oracle of Delphi was dedicated to Apollo, god of Light and Harmony. For over 1,000 years, pilgrims from all over the Mediterranean travelled to Delphi to receive the prophecies of  Apollo through the words of the priestess. It was such a renowned religious site that all the “Great Powers” of the times would erect a monument  to demonstrate their wealth and power to all visitors.

During the 6th cent. BCE, Naxos was one of the most prosperous Greek islands due to its strategic location in the center of the Aegean Sea combined with  the island’s  natural resources, such as water, farm land, marble quarries, emery mines and more. Thanks to the abundance of marble in the Cyclades, the Naxians soon developed excellent skills in carving marble into works of art  which were eventually displayed at the most famous sanctuaries of the ancient world. And, the Oracle of Delphi was included in the list.

The Oracle of Delphi required some necessary operational procedures  to facilitate the process of delivering prophecies. Whenever Pythia -the head priestess- was scheduled to chew the laurel leaves, inhale the hallucinogenic vapors coming from deep  fissures in the earth and begin murmuring words, petitioners should wait in line for order of admission. In continuation, her words would take the form of prophecies with the help of the male priests of the sanctuary.

However, there was always a way to get a higher place in the line…perhaps by offering a major gift to the oracle? Oh yes, and this is the case with the massive Naxian Sphinx statue. The representatives of Naxos wanted to get the privilege of “promanteia”, which means to become eligible to consult the Oracle first whenever they needed to do so. Therefore, their offering to Apollo’s sanctuary was a 2 meter statue of a Sphinx standing majestically on a 10 meter Ionic column. The Naxian Sphinx was placed close to the “rock of the Sibyl” at a clearly visible spot along the Sacred Way- the marble road which led the pilgrims to Apollo’s temple. The selection of this prominent location symbolized the political, financial and artistic superiority of Naxos island in the Archaic period.

But why a Sphinx and not another majestic work of art?

The Sphinx was a very popular theme during this period connected to the Egyptian culture which  shared close trade ties with Greece  at that time. A Sphinx was a mythical creature with the head of a woman, the body of a lioness, the tale of a serpent and the wings of an eagle. Sphinx statues were considered to have ferocious strength and were considered as guardians often flanking the entrances to temples. Specifically, the Sphinx of the Naxians was placed very close to the most sacred spot of Delphi, where Apollo had presumably killed the Python. This impressive archaic relief dates to 560 BCE, which coincides with the peak period of Naxian artistic production. The monument was made from a solid piece of Naxian marble and its transport still remains an admirable accomplishment. The statue was transferred  all the way from Naxos to the Oracle of Delphi…crossing the Aegean Sea into the Corinthian Gulf and continuing on an upward  overland route climbing   Mt. Parnassus, from the shore to the site of the Oracle.

Today, the original art is housed  in the Delphi Museum and a modern replica stands proudly  in front of the Naxos Town Hall facing the emblematic “Portara”- all that remains of Apollo’s Temple facing the Sacred Island of Delos, birthplace of the god.

Learn more about Naxos’ fascinating ancient past with a private tour and an expert certified guide from Naxos Cultural Tours.

Accept All, Decline All