A Mesmerizing Sunset at the “Portara” 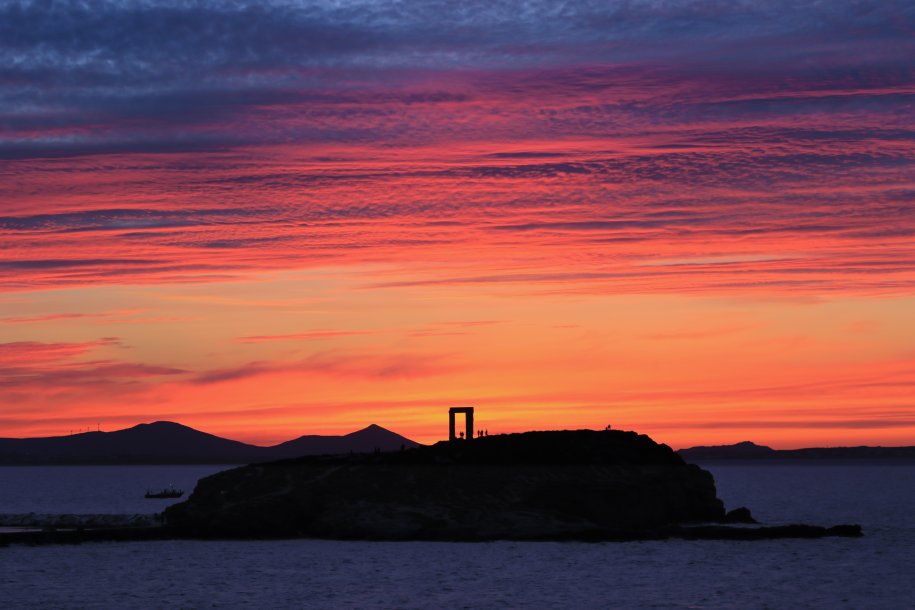 Light, harmony, beauty, order, moderation, arts, music and poetry… are only few of the attributes connected with the personality of the ancient god Apollo. He holds a very special place in the Greco-Roman Pantheon as he is the only god that keeps his Greek name throughout the centuries!

According to mythology, Apollo, one of the many illegitimate sons of Zeus, was  born on the sacred island of Delos, the brightest island of the Mediterranean. Right after his birth… in a blink of an eye… he miraculously turned into a beautiful young god looking for the ideal place to establish his sanctuary. Soon after, Delphi developed into one of the major shrines of antiquity. For over 1,000 years, prophecies were given at the sanctuary of Apollo by the head priestess, Pythia. However, as Apollo is also regarded as the god of logic and intelligence, his oracle would never dictate rigid doctrines and a “crystal ball” type of predictions. Instead, the vague answers delivered by the priests were full of intellectual value! Prophecies were worded in a way which required the supplicant to use his free will and be held accountable for his actions. Consequently, Apollo is not only the god of beauty and harmony but also a strong advocate of good reason, logic and high intellect.

During the peak of its power (7th and 6th centuries BCE),  Naxos took control of Delos and built a great part of Apollo’s sanctuary including the famous Avenue of the Lions, Apollo’s Temple and his Colossal statue. Not only do the Naxians honor the god Apollo at his birthplace but also on Naxos island itself: around 530 BCE, under the leadership of the tyrant Lygdamis, the Naxians began to build a monumental scale temple directly across from the island of Delos at a location called “Pallatia” today.  According to the most popular archaeological theory, the specific temple was dedicated to the god of Light and Harmony, Apollo.

Nevertheless, due to political reasons, the tyrant was overthrown and the temple was never completed.  However, an Early- Christian Basilica was built on the same spot and, even later, in the 13 century, the remains of the temple’s marble material were used to fortify the Venetian fortification of Naxos Town. The little body of land, where only the “massive gate” (the so-called “Portara”) survives today, was, once upon a time, connected with Naxos island. However, over the centuries, due to the rise in sea level, the land gradually became a separate island, which was only artificially connected to  Naxos  in the early 20th cent. Today the “Portara” represents  the landmark of Naxos and is the first emblematic symbol that visitors see when approaching Naxos by ship.

Manifestations of Apollo are found in each and every one of us: the desire to travel and visit new destinations, connect with nature and learn about unknown cultures embodies the Apollonian spirit of world explorers.

If you are fond of Greek Mythology, visit www.naxosculturaltours.gr and discover more about our Naxos Mythology tours.

Accept All, Decline All